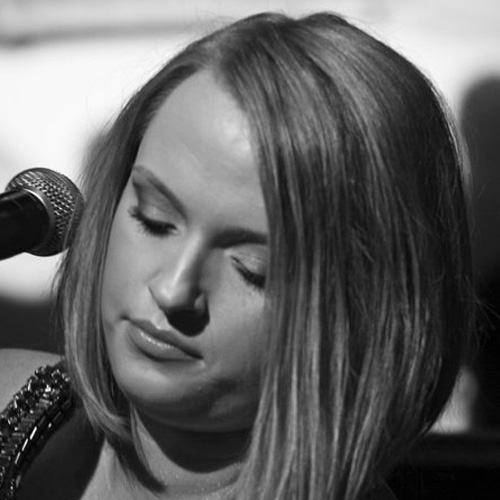 Agnieszka Iwanska is an accomplished and gifted jazz vocalist, composer and lyricist. Her sultry and sensitive singing style stands out as a fresh and exciting voice in jazz. As a vocalist, Agnieszka has been hailed as the voice of promise by noted jazz critic Howard Reich from the Chicago Tribune. Mr. Reich also mentioned that the size of her alto and and the obvious maturation of her delivery brings her to a new artistic level . Brad Walseth of jazzchicago.net praised her style and performance by nothing that Like Basia, Iwanska is a Polish singer who has taken on the Brazilian sound pioneered by Astrud Gilberto. She sings her well-written songs showing considerable ability, and charms the crowd with her fresh and honest approach.

Agnieszka is a graduate of the Jazz Studies program at the University of Katowice, Polands only accredited jazz program. While in Poland, Agnieszka had the opportunity to perform with some of the countrys top jazz talents. After arriving in the US, Agnieszka formed her own band; a quintet featuring some of Chicagos talented jazz musicians. The Polish TV Polvision and Polsat 2 made a few programs about Agnieszka.

Iwanska received an award Polonus 2008 as an Artist of a Year in most prestigious contest among the Polish community in Chicago. Agnieszka and her band perform throughout the Chicago area. Among her numerous achievements, Agnieszka received first prize in the Krokus Jazz Festival and second prize in the International Competition of Jazz Vocalists in Zamosc, Poland. Working with keyboardist/composer Paul Scherer,

Agnieszka completed her first full-length CD of original material. It’s titled All That I Am. CD features songs in English and Polish, all written and arranged by Iwanska and Scherer. All That I Am got excellent reviews from jazz critics. It was on the playlist of 110 radio stations nationwide (including the biggest global platform Smoothjazz.com). It also was number 38 on the Top 50 National Indie Chart for 15 weeks.

Agnieszka was the first Polish born vocalist to sing the National Anthems at the Wrigley Field in Chicago. In 2011 Agnieszka was one of the headliners of the Third Ward Jazz Festival in Milwaukee WI and Napervillle Jazz Festival. Agnieszka has recently released her 2nd CD “Colors” produced by Paul Scherer. It got released under the name of UroSoule. It’s getting some great reviews from well-established music critics. Agnieszka’s unique sound is not to be missed. Her unmistakable honesty and lack of pretension stand out as hallmarks of a talent worth getting to know.

UroSouleis an infectious original jazz/soul created by Chicago-based duo of Paul Scherer and Agnieszka Iwanska. “Colors” is a collection of original sultry and sophisticated compositions co-written and produced by Paul Scherer. Scherer assembled a collection of top session musicians from Philadelphia to Los Angeles to create an addictive blend of original works that pulse with attitude and style.